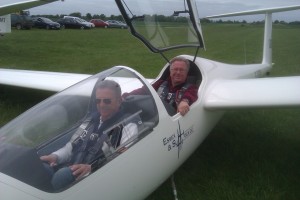 Having a grand total of 1 hour and 50 minutes flying time in his log book, on the 23rd of May 1965, Paul Robinson made his first solo flight in a Kirby Cadet Mk.III . To celebrate the 50th anniversary of this milestone Paul took the Club Chairman, Bob Godden, for an aerobatic flight on the 23rd of May 2015 including multiple loops, wing overs and a low level beat up.

Over the course of 50 years flying gliders Paul has taught many people to fly and for several years worked as a professional instructor at Dunstable Downs. Paul now instructs at Essex & Suffolk Gliding Club but prefers to pursue his career as a cross-country pilot and delights in occassional aerobatic flights such as this one for the 50th anniversary of his first solo. Noting the nervous apprehension on the face of the Chairman, it is clear that the verve of Paul’s aerobatic flying has lost none of its vigour.