The UK Civil Aviation Authority (CAA) has confirmed its approval of a request from London Southend Airport to establish controlled airspace (CAS) around the airport. However, the extent of the CAS original requested has been reduced following assessment work carried out by the CAA.

Southend’s new airspace will be Class D, allowing access on request to transiting general aviation aircraft. It will feature a control zone (CTR) around the airport itself from surface up to 3,500ft, and a larger control area (CTA) from 1,500ft to 3,500ft. The airspace will become operational on 2 April 2015. 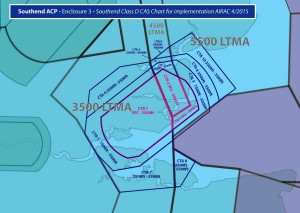 The CAA agreed with the Airport that the measure was necessary to further enhance the protection given to commercial air transport flights into and out of Southend. The number of airprox incidents in the vicinity of the airport has increased in recent years – including two category A incidents, the most serious. Alternatives to controlled airspace, such as establishing a Radio Mandatory Zone (RMZ) around the airport, were considered, but a trial RMZ running since the second half of 2014 has proved not to be an appropriate long-term solution in this instance.

London Southend Airport, which currently sits within Class G airspace, has seen a significant increase in commercial air transport movements in the last three years. In accordance with the CAA’s airspace change process, the Airport launched a consultation on establishing CAS with the general aviation community and the aviation industry, before submitting its proposal to the CAA.

Mark Swan, Director of the CAA’s Safety and Airspace Regulation Group, said: “The new arrangements at Southend will safely support the airport’s increased commercial air transport operations, whilst minimising as far as possible the impact on other airspace users. Ultimately, this is a very busy piece of airspace, used by a wide range of aircraft, and we have to be sure that the safety of airline passengers is given absolute priority.”

The new airspace will be reviewed six months after implementation to ensure that it is working as anticipated.

The full decision, including charts, has also been published by the CAA.