ESGC took Saturday with flying colours as each of it’s pilots won their class.
The luck was on our side as George Green’s logger failed, but Rob Lockett was flying the task, too. He was the fastest of the pundits and got the 3 points for ESGC. 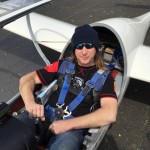 Vernon Bettle managed to top the Intermediate class and with Adrian Tills being the top man of the Novices. So a clean sweep for ESGC scoring the maximum of 9 point. Following are the NGCs pilots – all came second to ESGC’s winning men – with 6 points and Rattlesden Gliding Club (RGC) trailing with only 1 point. It should be mentioned that RGC didn’t have pilots in all classes.
Detailed result to follow including all the scoring as per national ladder.

Results were changed on Sunday morning as Rob’s flight was excluded from the results, so NGC’s pundit won and George came second as he did start the task. Therefore the points after day one are:
ESGC 8, NGC 7, RGC 1. 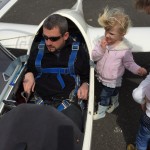 There was no flying on Sunday due to the adverse weather.
The forecast for Monday looked better then. The briefing scheduled for  Monday morning 9:30. 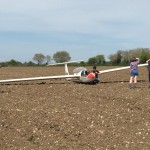 Monday morning – the forecast still looking good – tasks were set and the gliders grided. From that point in time the weather went downhill. Therefore it was decided to re-task which significantly reduced the distance to fly. Even though nobody was able to complete their task and we had as you can see someone to be picked out of a brown field. By the time this is written we still do not have the final results/points.